After a long week of studying, practicing skills, and being evaluated for skill competency, what better way is there to decompress than pounding it out? After such a stressful week some may have wanted to pound their head against their desk, but second-year student Morgan Pearson had a different idea. During this Thursday’s lunch break, a classroom turned into an exercise studio as Morgan led 15 classmates in a POUND fitness class. This cardio workout incorporates numerous whole-body strengthening exercises such as squats, lunges, jumps, and abdominal crunches–all while pounding drum sticks to the beat of the music.

I must admit, at first sight, I was unconvinced that everyone would stay in-sync with their drumsticks. But I was proven wrong when, after just 18 minutes, Morgan whole-heartedly exclaimed, “Yes!! We sound like we are in a band!” Needless to say, students caught on very quickly to Morgan’s encouraging and tough class. They even cheered for one last song towards the end of the workout. After class, second-year student Christy Houk joyfully stated, “Every single muscle fiber in my body is burning!”

Morgan plans to lead classes every Thursday at lunch in Claver Hall room 410 for the remainder of the semester. So come one, come all, and be ready to sweat, burn, and POUND out your stressors! You might just learn some new exercises for your future patients, too! 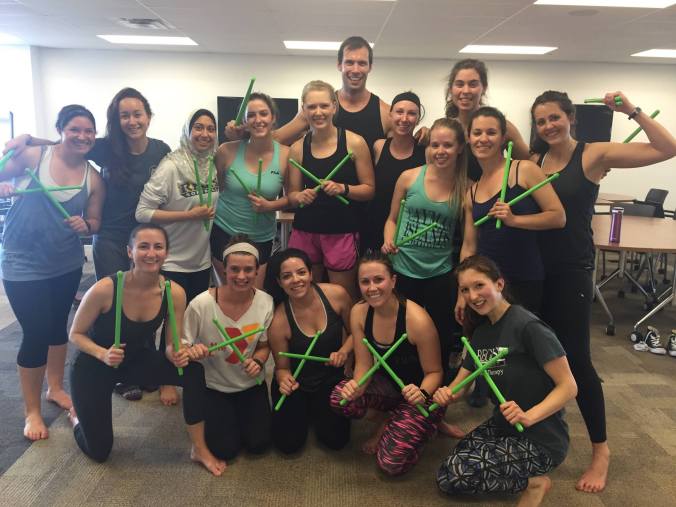